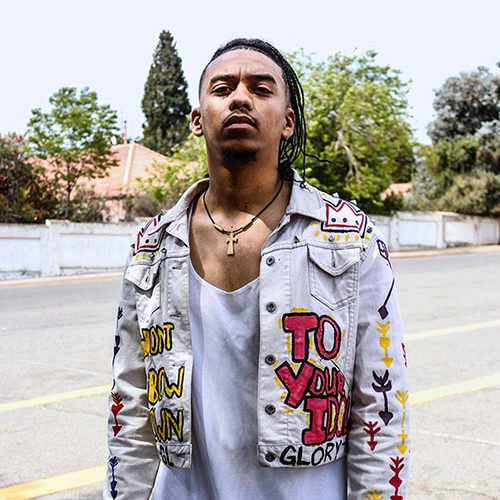 Keagan Mitchell Holland is a rapper from Johannesburg, South Africa.

The artist who is better known as Keagan Holland was born in 1995, September 23. Keagan explained that he grew up in an ordinary home with an older brother who loved Hip Hop. His brother would play music of rappers such as 50 Cent, Eminem and The Game loudly, little did Keagan know that this will spark the love of Hip Hop in his heart.

Having a sense of belonging, Keagan found his purpose in the church in 2008. With that he joined a crew and it was then when his passion for dance grew as well. He soon performed in multiple communities in Johannesburg with the crew. In 2010, Keagan began to learn that he could express his faith through the form of Hip Hop and then toured in Ceres, Western Cape with the crew in February 2016.

After leaving the crew he joined the ‘Save the World Foundation where he preached at over a hundred schools in Johannesburg and Kwa-Zulu Natal (KZN). Keagan has been a solo artist since June 2016 and released a mixtape in KZN titled ‘‘OutReach‘‘. Since then the artist has collaborated with artists the likes of Ricwa, Jhey-Dot, JD Crosson, Unique, Phlo-Girl, KSTV and Michael Zulu, just to name a few.

Keagan has been on the cover of Soweto Urban Newspaper twice, appeared in a local magazine and had multiple radio interviews on radio stations such as Kofifi FM, Ekklesia Radio and Eldos FM. Keagan debuted on Television he collaborated with Ricwa on a song titled “Church Girls” in January 2018.

In February 2018, Keagan founded his own group called El Tribus and then released a solo mixtape called “Promised Land”. Shortly after releasing his solo mixtape, he collaborated with Ricwa to create a mixtape titled “Kings of the South” which is also now available. The two artists have toured all over Gauteng with these two mixtapes.

Keagan believes in a higher hope which echoes through his artistry. Through music, Keagan Holland has found direction, a mission and a calling.